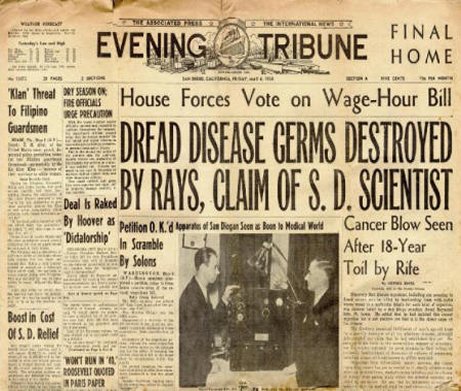 1937 was a year of frustration. Johnson and Rife were trying to get Dr. Gruner from Montreal to join Rife in his laboratory. The Special Research Committee of the University of Southern California was hoping to make an announcement by the end of the year concerning the “aetiology of cancer.” It was decided that they would announce only how cancer developed-how the virus changed form. They were not going to tell the public about the treatment. They knew that there would be tremendous scientific opposition when they described how cancer developed and why other researchers hadn’t been able to isolate the “germ.” So they reasoned that they had to establish cancer’s etiology before announcing the unique Royal Rife Machine cure. Yet, given what they knew, the clinical records that they had, and the microscope’s capacity to disprove the claims of the opposition, their caution was undoubtedly one of the worst decisions they ever made. They were naive about the financial, scientific, and medical opposition as well as how the Rife discoveries would threaten these powerful interests.

Within a few years, they would discover to what lengths the men at the top of these three professions would go to crush them and suppress the cure for cancer. But in 1937, they thought that they could be conservative. They believed that conservatism would advance their goal. It was a deadly error, for almost 50 years would pass before the American public finally learned about Rife’s scientific miracle. Dr. George Dock, the internationally famous member of the Special Research Committee, was now working actively with Johnson to interest other prominent men in the Committee’s work. He would later side with the AMA, keeping quiet about the suppression and accepting the AMA’s highest award, but in 1937 he joined Johnson in the front lines.

In late December 1936 and early 1937, Dr. Johnson and Dr. Dock had long conversations with Dr. Charles Martin , former Dean of McGill University in Montreal. Their purpose was to convince him that Dr. Gruner had to join Rife. Martin returned to Canada after his talks with Johnson and Dock. There Martin attempted to have McGill University pay for Gruner to work for several months in the Rife Laboratory. But Martin failed. The Depression went into a frightening second stage in 1937-38. Money was limited. And those in Montreal who were opposed to Gruner’s findings were not willing to support financially a project which could result in even more findings to their dislike. Gruner later was assigned two laboratory associates who were convinced “monomorphists”. Thus, his work in proving pleomorphism and particularly the cancer etiology was obstructed, if not actually sabotaged. It is important to recognize that many of the men involved in the Rife work were doctors and researchers. They were not men who fought political battles and in many ways they crumbled when they were challenged by determined political power. They believed in scientific procedures.

Even today in the mid-1980s, men and women of similar good will conduct correct research procedures. In discussing the Rife cancer treatment with such people, it is common to hear top men in physics, microscopy and cancer research state, “Suppression of a cancer treatment in the 1930s is impossible. Scientists would have known about it. It couldn’t be covered up.” The truth is that the cure for cancer was covered up. And t h e naivety of cancer researchers as well as scientists in related fields persists to modern times. The question now is, what will they do when they learn t h e facts in this report? A related question is, how courageous will the American free press be? Only time will tell. In February 1937, while still attempting to arrange Dr – Gruner’s transfer to San Diego, Johnson wrote to Canada’s most esteemed cancer researcher, Dr. Edward Archibald. In the course of the lengthy letter, Johnson explained the Committee’s reasons for not making a public announcement at that time. Archibald had earlier asked Johnson about the Committee’s silence and also passed on the concerns of McGill’s Dr. Martin about the same failure to announce.

Johnson letter explained “We realize that while there has been a distinctly apparent change in the attitude of the medical profession toward the etiology of cancer during the last few years, any announcement we make will be met with tremendous scepticism, and we must make assurance doubly sure before we publish.” We hope that you will not feel that we are asking too much in urging that Dr. Gruner come to the Rife Laboratory and collaborate with us in the final report. If you and Dr. Gruner agree to this, perhaps we can give the world a real contribution on the etiology of cancer before the end of 1937. “Our Committee has decided that the etiology of cancer must first be established before we publish anything concerning the possible treatment. We are, therefore, going to let the Royal Rife Machine rest until this most important work is done.” So that was it. A committee chose to be silent about a treatment which already had cured cancer. The cautious doctors preferred to carefully develop the etiology of cancer to the point where it was incontestable. People would die while the group mind of the committee played it super safe. It was a senseless and probably immoral decision, especially when they failed to get Dr. Gruner anyway, thus losing any immediate chance to prove the etiology in a way that could not be challenged. It would have been better to go ahead and make the announcement about the treatment, bring in the existing sceptics and let them see the clinical, day-by-day miracles. But they didn’t do it. Funny, how men often think they have forever. It is a fault which is passed down from generation to generation. Even today there are those making the same mistake. They want to test the Rife treatment again and again, and they say that after a year or so of careful scientific work which will be “incontestable,” an announcement will be made. Shakespeare could write a modem tragedy about such men’s folly.

On March 31, 1937, C. I. Martin, Faculty of Medicine, Office of the Dean, McGill University, Montreal, informed Johnson that “you will not be able to get him (Gruner) for the present.” Martin then wrote that he and his wife were leaving on a vacation to Italy. The cure for cancer could wait. Unfortunately, Gruner never was able to go to San Diego. Rife continued a correspondence with him, and Johnson later sent Gruner his own Royal Rife Machine -one of the finest then in existence. But this was after the AMA had closed down most of the treatments. Gruner became too frightened to use it. Me gave the Royal Rife Machine to a priest who was a ham operator, and one of the greatest technologies of the 20th century ended up being used as spare parts for a short-wave radio! Meanwhile, the difficulties were mounting. Rife had to visit Louisville, Kentucky again in May 1937 because of continued problems with his eyes.

In April, Dr. Walker of the Hooper Foundation had to quit the work because of illness. Another doctor was assigned, but he accomplished nothing. The San Francisco research was essentially finished by mid- 1937. Johnson reported that the San Francisco surgeons had proved totally uncooperative. In the year and a half that Walker worked, he was able to get only “5 or 6 tumors” from his surgical colleagues. On May 28, 1937, Dr. Milbank Johnson closed the third clinic. On June 1, he wrote to his friend Dr. Joseph D. Heitger in Louisville, Kentucky, the eye specialist to whom he had sent Rife: “I closed my clinic on May 28, having been running it for eight months. Our special effort this past winter has been working on cataracts, and while we have treated a number of other infectious conditions (if cataract is an infection), still our principal work has been on the eye. “The application of the Royal Rife Machine as we have used it, does, in the great majority of cases, restore the full visual function of the eye; that is, the portion of visual disturbance due to opacities in the lens. How it does it and why it does it, I do not know, but the above statement is an actual fact, supported now by many cases. “How I wish we could get together and go over this work. I believe it will result in epochal changes in the profession’s handling of cataract cases.” Johnson spent the summer of 1937 in La Jolla outside San Diego. There he worked with Dr. Couche who continued to use the Royal Rife Machine in treatment. In the fall of 1937, Phil Hoyland, the engineer whom Johnson had introduced to Rife, moved to San Diego to begin with three others the commercial manufacturing of the Royal Rife Machine.

The company was named “Beam Ray.” It would play a crucial part in the AMA’s destruction of Rife’s cancer treatment. Hoyland would become the agent of the AMA and would sue Beam Ray with an expensive Los Angeles attorney representing him while the AMA pressured the doctors behind-the-scenes to stop using the Royal Rife Machine’s or lose their license to practice medicine. The trial would start Rife on a long road of deterioration, alcoholism and depression . . . as the deaths from cancer mounted year after year. Johnson’s introduction of Philip Hoyland into the Rife research and treatment program was undoubtedly one of his most serious miscalculations. Hoyland was a capable electrical engineer and Johnson saw the talent . . . but not the man’s character. This error of Johnson’s may have contributed to his own suspicious death in 1944 and the end of the Special Research Committee which came so close to telling the world that a cure for cancer and other infectious diseases had been found. But that disaster was still in the years ahead. Johnson returned to Los Angeles in the fall of 1937 and began treating patients again with the Royal Rife Machine. Despite the obstacles and setbacks of 1937, progress continued with the development of the machines. Scientists in various locations were interested. The future seemed hopeful. But any optimism was a mirage. A storm was building and soon would break over San Diego.