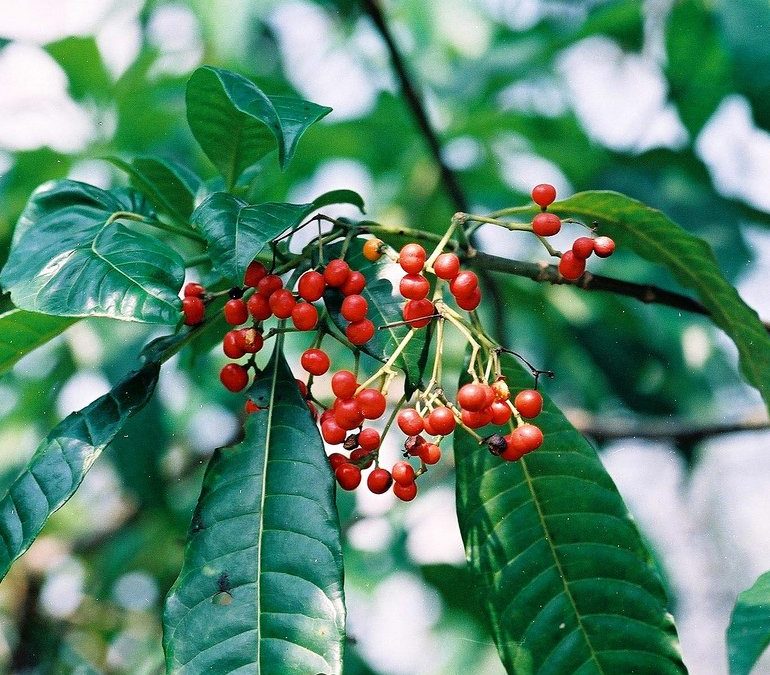 An extract from the bark of the roots of the African tree, Rauwolfia vomitoria, containing the alkaloid, alstonine (also called BG-8). Research studies, many being in vitro, have shown alstonine to be especially effective against hormone-related cancers, such as those of the breast and prostate, as long as the patient was not simultaneously taking any form of hormone-related treatment, such as tamoxifen or oestrogen. The anti-psychotic alkaloid, reserpine, also found in Rauwolfia species is removed from Rovol V during the extraction process.

For 40 years, the Yugoslavian molecular biologist, Mirko Beljanski PhD (1923–1998), in association with his wife and research associate, Monique, conducted research into the respective roles of DNA and RNA in the development and cure of cancer, first at the Pasteur Institute in France (1948–1978) and then at the Faculty of Pharmacy at Chatenay Malabry (1978–1988). During this time, he wrote 133 papers, published in both French and international journals.

Cancer is generally regarded as arising from damage to or mutations of the molecular structure of DNA. Beljanski”s primary thesis is that cancer is caused not only by DNA mutations, but also by damage to the hydrogen bonds that hold the two strands of the DNA double helix together. Like a damaged zipper than is failing in places, allowing the two parts to separate, cancerous or pre-cancerous DNA has many broken or weakened hydrogen bonds. Once these bonds are broken over a particular area of the double helix, the DNA in that area is destabilized, and carcinogens are more readily able to infiltrate and cause the molecular damage that can lead to cancer. This explains, for example, why an excess of certain hormones such as oestrogen and testosterone (and other steroids, too) is carcinogenic, although they do not appear to be the direct cause of mutations.

Among his other discoveries is that fragments of RNA (which he called Beljanski Leucocyte Restorers or BLBs) are capable of rapidly restoring the depletion of (red) blood platelets and (white) leucocytes brought about by radiation therapy and chemotherapy agents. BLBs selectively stimulate the normal replication of red and white blood cells in the bone marrow and spleen, without enhancing the proliferation of cancer cells. Beljanski reported that patients who received BLBs along with chemotherapy suffered few of the expected side effects, such as nausea and hair loss, and were able to continue with their normal daily lives.

Beljanski also developed what he called the ‘oncotest’ – a way of determining which kind of substances could destabilize DNA function, leading to cancerous cell proliferation, and, conversely, which kind of substances could repair or cause the programmed death (apoptosis) of damaged and cancer-forming DNA. Among such molecules, he discovered, are the naturally occurring plant alkaloids, alstonine, flavopereirine, serpentine and sempervirine, which are able to distinguish between normal and cancer-forming DNA, either repairing the damaged DNA or causing the death of the malignant cells (apoptosis). Beljanski conducted many trials on the anti-cancer properties of these substances. He was able, for example, to cure an appreciable proportion of mice with lymphoma. Other in vitro studies showed that flavopereirine was active against a number of other cancer cell lines (brain, breast, ovarian, prostate, kidney, thyroid, pancreatic, colon, liver, skin), including those that were multidrug resistant.

His research also showed that the flavanone, JO-1, which contains a large amount of naringin as well as some as yet unidentified substances, prevented multiplication (in vitro) of human cancer cell lines (colon, ovary, breast, leukaemia). Under the same experimental conditions, normal bone marrow cell multiplication was not affected. He also demonstrated that these substances also work in synergy with standard chemotherapy agents, providing better results than with the chemotherapy alone.

Complement all herbal cancer treatments with a The Professional Rife Machine, Version 3 Machine.