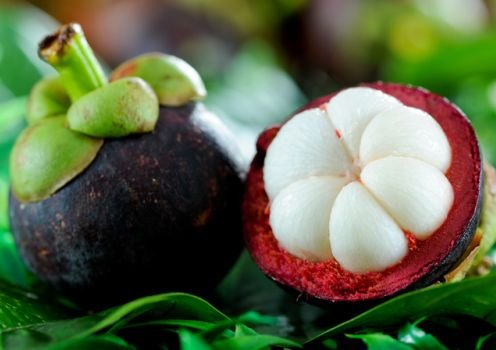 Anti-cancer effects of Xanthones from rinds (skins) of mangosteen.

Mangosteen, Garcinia mangostana Linn, is a tree found in South East Asia, and its rinds (skins) have been used as traditional medicine. Phytochemical studies have shown that they contain a variety of secondary metabolites, such as oxygenated and prenylated xanthones.

These xanthones are different in the number of hydroxyl and methoxy groups. Except for methoxy-beta-mangostin, the other three xanthones strongly inhibited cell growth at low concentrations from 5 to 20 muM in human colon cancer DLD-1 cells. Our recent study focused on the mechanism of alpha-mangostin-induced growth inhibition in DLD-1 cells. It was shown that the anti-proliferative effects of the xanthones were associated with cell-cycle arrest by affecting the expression of cyclins, cdc2, and p27; G1 arrest by alpha-mangostin and beta-Mangostin, and S arrest by gamma-mangostin. alpha-Mangostin found to induce apoptosis through the activation of intrinsic pathway following the down-regulation of signaling cascades involving MAP kinases and the serine/threonine kinase These findings could provide a relevant basis for the development of xanthones as an agent for cancer prevention and the combination therapy with anti-cancer drugs.

It is very important to note that all the tests on Mangosteen found the most active Anti-cancer ingredient xanthone in the Rind or Skin. Some resellers of Mangosteen Juice or powders may focus on the fruit extract, which has a poorer concentration of xanthones. The addition of refined sugar in many Mangosteen juices reverse the effectiveness of xanthones on the cancer cells, as cancer thrives on refined sugar products. (glucose dependency). If you choose this treatment, source only the trusted suppliers of Mangosteen Supplements, or locate a supplier of this fruit in a tropical / subtropical region or Country.

How to prepare Mangosteen Rind (Skin) at home

Prepare Mangosteen, by removing all fruit, and keeping only the rind/skin. These are very thick and are a dark red/ crimson color. Cut the mangosteen rind into very thin slices (2mm thick). Use a dehydrator or sun dry the skin. Store in airtight bottles.

Simmer a handful of Mangosteen Skins in 1 litre of water, do not boil. Simmer for 20 minutes. Strain and refrigerate, or add green tea and drink warm. Make fresh ”Mangosteen” tea in this manner and consume twice a day for 30 Days. Combine with a Bruess Juice Diet for an extra powerful anticancer treatment

Study 1: 8/2003
Induction of apoptosis by xanthones from mangosteen in human leukemia cell lines. Journal of Natural Products. 2003 August;66(8):1124-7 The study determined the anti-cancer activity of six xanthones extracted from the rinds (skins) of mangosteen (Garcinia mangostana). The in-vitro tests were carried out on human leukemia cells. The researchers found that all tested xanthones inhibited the growth of the cancer cells. The xanthone with the strongest inhibitory effect was alpha-mangostin.
Study 2: 1/2004

Antiproliferation, antioxidation and induction of apoptosis by Garcinia mangostana (mangosteen) on SKBR3 human breast cancer cell line. Journal of Ethnopharmacoly. 2004 January;90(1):161-6 The aim of this study was to determine the antiproliferative, apoptotic and antioxidative properties of a methanol extract of mangosteen (Garcinia mangostana) rinds (skins). The in-vitro test was carried out on human breast cancer cells, subject to different concentrations of the mangosteen extract. The researchers found dose-dependent inhibition of cancer cell proliferation. The extract also caused apoptosis on breast cancer cells and inhibited the production of reactive oxygen species. The study concluded that the methanol extract from the rinds (skins) of mangosteen has potential for cancer chemoprevention.

Study 3: 3/2006
Antioxidant xanthones from the rinds (skins) of Garcinia mangostana (Mangosteen). Journal of Agricultural and Food Chemistry. 2006 Mar 22;54(6):2077-82. The aim of this study was to identify phytochemicals in mangosteen (Garcinia mangostana) with anti-cancer activity. The researchers identified 14 xanthones, of which two were for the first time identified: 8-hydroxycudraxanthone G and mangostingone. The other xanthones were cudraxanthone G, 8-deoxygartanin, garcimangosone B, garcinone D, garcinone E, gartanin, 1-isomangostin, alpha-mangostin, gamma-mangostin, mangostinone, smeathxanthone A and tovophyllin A. The phytochemicals with the strongest antioxidant activity were 8-hydroxycudraxanthone G, gartanin, alpha-mangostin, gamma-mangostin and smeathxanthone A. Alpha-mangostin inhibited preneoplastic lesions in a mouse mammary organ culture assay following treatment with a carcinogen.